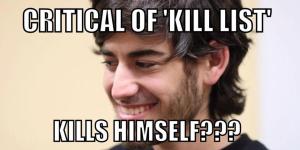 As the Congressional investigation into the DOJ’s prosecution of Aaron Swartz has continued, apparently a DOJ representative has admitted that part of the reason it insisted on having Swartz plead guilty to a felony and go to jail, no matter what, was that it feared the public backlash for the original arrest if they couldn’t then show a felony conviction and jailtime. According to a Huffington Post article, quoting various sources:

Some congressional staffers left the briefing with the impression that prosecutors believed they needed to convict Swartz of a felony that would put him in jail for a short sentence in order to justify bringing the charges in the first place, according to two aides with knowledge of the briefing.

The odd thing is this little tidbit comes at the very, very end of a longer article, most of which focuses on the DOJ telling Congressional staffers that part of the reason they went after Swartz with such zeal was because of his infamous Guerilla Open Access Manifesto. That might explain why they were so eager to arrest him, but it seems like the much bigger deal, considering all the concern about prosecutor discretion, that after they arrested him, they then didn’t want to look bad, which is why they continued to demand jailtime and felony convictions.

Many people have assumed all along that the Manifesto played a big role in the case — and the Manifesto has certainly been a lightening rod concerning Swartz’s activities. If you read the actual “manifesto” it’s not quite as extreme as some make it out to be — with much of it talking about taking stuff that is public domain, but still hidden behind walls, and making that available again. The controversial bit really is this paragraph, which starts out with legal activities, but gets much more ambiguous at the end:

We need to take information, wherever it is stored, make our copies and share them with the world. We need to take stuff that’s out of copyright and add it to the archive. We need to buy secret databases and put them on the Web. We need to download scientific journals and upload them to file sharing networks. We need to fight for Guerilla Open Access.

Note that initially he’s talking about stuff that is out of copyright. When he’s talking about databases, note that he talks about buying them for the sake of putting them online, not infringing on the works. It’s just that bit about scientific journals. And, yes, if those works are covered by copyright, there’s likely infringement there, but it’s not entirely clear. Especially in an age where many professors post up free copies of their research any way, and where it looks like we’re moving to an age where more and more research is open access anyway. In that context, is what he said really so bad?

Apparently the DOJ thought it was a reason to throw the book at Swartz, even if he hadn’t actually made any such works available.

Some may agree with that, but it seems like a jump towards “thoughtcrime” since he hadn’t actually made any move towards making the JSTOR data available. It’s possible that he planned to only make the public domain works (of which there are many) available. It’s also possible he planned to leak the whole thing. But, really, you would think that there should be a bit more evidence of that before prosecutors throw the book at him.

More importantly, it suggests that Swartz was arrested and prosecuted for expressing his opinionon how to solve a particular problem. You may or may not agree with it, but I thought the US was supposed to be a place where we were free to express ideas. There’s even some famous part of our Constitution about that…

Posted on February 26, 2013, in Politics and tagged Aaron Swartz. Bookmark the permalink. Leave a comment.